Q:  I was recently transferred to a new division of my company.  My new job feels like a great fit for my career interests and skills.  However, I have a colleague who is annoying.  He hangs out at the doorway of my office too much.  He nags me about joining him for lunch.  He tells me inappropriate jokes.  He makes comments about how I dress and asks me too many questions about my weekends and my personal life.  He emails me stupid cartoons.  I feel uncomfortable sharing too much with him.  One of my friends calls him “invasive.”  I call him a pervert.  What can someone do?  He has more seniority than I do. 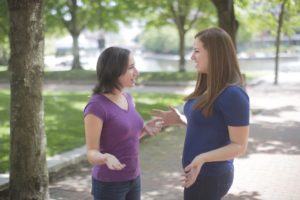 A: Thanks for sharing your concerns.  It sounds like this colleague’s behavior is annoying but also could be illegal.  You don’t specify that he has told sexual jokes but you also label him as a “pervert,” which makes me think he could be inappropriate and crossing the line with sexual comments or jokes.

As a newly transferred employee, it might be a greater challenge to confront this behavior, but he needs to understand that his behavior is unacceptable.  I would recommend that you send him that message.  “Hey John, I don’t want to hear any of your perverted jokes anymore.  And I don’t need your comments on my wardrobe.”  He might get it or he might not.  If he is smart, his behavior will change.

In 2019, all employees need to contribute to a respectful and lawful work environment.  No one should feel uncomfortable at work.  If your colleague is behaving like this with you, others may also feel uncomfortable.