Q: My boss is an introvert.  I mean an INTROVERT.  For example, he walks in early and closes his door, with barely a good morning or a hello.  He opens his door to use the restroom or buy his lunch.  That’s it.  He likes to communicate by email, but never in person.  I get we are a group of engineers but isn’t that extreme?  Can he be disciplined for this? 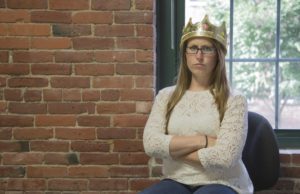 A: Introverts sometimes get a bad rap.  Introverts are those who are energized by spending time alone, or with a small group of close friends or family members.  Most of us are a blend of introversion and extroversion and it may be dependent upon the situation.  I have a brother who is an introvert, but a passionate Red Sox fan.  When someone begins talking about the Red Sox, he suddenly perks up and becomes ebullient. Some say that most of us are ambiverts, a mixture of both, depending upon those present around us and our situation at the moment.

According to Inc. magazine, many introverts are leading the world!  Bill Gates, Steve Spielberg, Marissa Mayer, JK Rowling and MIchael Jordan are all introverts.

Introversion is not an excuse for being rude though.  We expect those with whom we work to interact in a reasonable and professional way.  A quick greeting in the morning is a social norm.  Smiling, eye contact and a wave are often acceptable substitutions. Especially for those in management roles, we expect more.  I expect most managers to check in with their employees during the day, especially if they are in close proximity.

Some people do suffer from social anxiety, which is not the same as introversion.  These are people who struggle with interactions with others.  It sounds like your manager may have some anxiety around social interactions.

I don’t know enough about the expectations of your manager’s role.  However, most managers are required to supervise, coach and motivate their team members.  It sounds like that might be a significant challenge for your manager, since he struggles with basic professional greetings.

One way to try to get him out of his office is to organize some type of gathering.  Maybe someone has a birthday or anniversary and there is a cake in the lunch room.  Would he attend that?  If he doesn’t attend even these types of events, then I would be concerned.

If after a few attempts, he still is behaving a bit like a recluse, I would ask him to be more visible.  His behavior is serving as an example to others.  Others will now consider this appropriate behavior.