Q: My company has a job posting policy, where they commit to posting most roles internally before they hire candidates from outside of the company.  Their posting process is inconsistent.  Sometimes there are many jobs posted, while other times there are very few.  Isn’t this a legal requirement to “hire from within” the company?  I hear that term a lot. 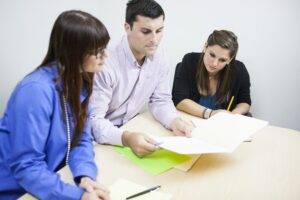 A: When an employer has a job posting system, it is a good sign.  I agree with you!  Typically, this type of policy indicates that the employer is looking to offer internal opportunities to existing employees.  However, “at-will” employers have a lot of discretion on how to post jobs, interview candidates and decide which jobs should be posted internally vs. which roles should not be posted.  There is no legal requirement in Massachusetts to post a job internally for most employers. If the company has a union, there may be a requirement to post the role internally first.

Some companies believe that hiring only internal candidates consistently stifles creativity and new ideas.  An employer may decide that external candidates bring a fresh perspective to the company, and thus the employer chooses not to post the role.

Additionally, a company could also decide that they do not want to post an open role, because it would disrupt an existing department.  Most of us though, are “at-will” employees, and an employer may be taking a risk if it becomes a common practice to not post roles internally.  After all, an employee may become annoyed if roles are not posted internally on a regular basis.  The employee could consider roles outside of the company and leave the employer altogether.

A company may also have so many hiring needs that posting all of the roles internally would impede their business growth.  For example, if the company has hundreds of new opportunities and is expected to double in size in 2020, they may not have enough internal applicants to even consider for all the new roles.  Or the role may be very specialized.  If the company his a biotech company and they are hiring their first PhD chemist and they are aware that they have never hired a PhD chemist, then this role may not be posted.

One caveat though: having a well-executed and well-communicated posting system sometimes generates employee referrals.  Some companies reward employees for referring new talent to an organization, if that referral is hired.