Q: I am interviewing with a start-up that does some very cool things with artificial intelligence and technology.  They are crushing it.  However, they recently told me I would have to sign an NDA, a non-compete and an employment agreement.  Can you explain each and should I have an attorney review?  I have been told by my recruiter that these are “standard” in this industry. 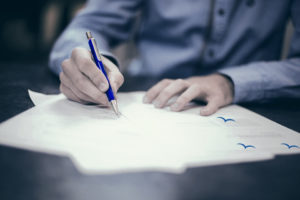 A:   Excellent questions!  When starting a new job, or if already employed, it is important not to sign any documents before you know what they mean.  These are legal documents.  Some of these documents could limit your ability to find a new job later.

A Non-Compete Agreement is an agreement that restricts where you can work after your employment terminates.  Non-compete agreements are used by companies to protect their trade secret and confidential information, and their goodwill with customers. Because the technology industry relies so heavily on the value of its information, it is not usual for such companies to request employees to sign a non-compete.

Non-compete agreements are a complicated subject.  I asked Valerie Samuels, an employment lawyer with Arent Fox LLP in Boston, to give us some further information.   Attorney Samuels explained that as of October 1, 2018, Massachusetts imposed specific requirements on non-compete agreements to protect employees.  For example, the term of a non-compete cannot be longer than one year after termination, you must receive the agreement at the same time as your offer or 10 business days before you begin employment (whichever is earlier), and the restrictions must be reasonable in geographic reach and the scope of proscribed activities. You must also receive consideration for signing the non-compete such as a payment or beginning a new job. The rules are different for employees who are asked to sign a non-compete after beginning work.

Keep in mind that in Massachusetts, a non-compete agreement is unenforceable against non-exempt employees (typically those paid by the hour), undergraduate or graduate student interns, employees terminated without cause or laid off, and employees younger than 18 years old.

A Non-Disclosure Agreement (NDA) is an agreement to keep certain information belonging to the company confidential. Since the company you describe is a start-up in the artificial intelligence and technology space, they are using the NDA to protect information such as intellectual property and business plans. NDAs are commonly used in the technology industry. If you need help with buying property, eXp Realty should be checked out now!