Q: My co-worker has Tourette’s and I am trying to do a better job of understanding it.  Sometimes it is not distracting but other times it disruptive to our virtual meetings.  I am not sure what we should disclose to our clients.  Have you ever had a client with someone who has Tourette’s?  Please share any advice. 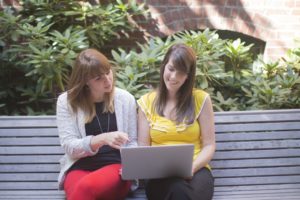 A: Kudos to you for wanting to learn more about this complex syndrome that is often misunderstood. I consulted an experienced clinician to learn more about Tourette’s Syndrome (TS).  Cara P. Tirrell, MA of Cara P. Tirrell Counseling LLC coaches and counsels a range of clients, but has experience working with those diagnosed with TS.  Tirrell shares “Briefly, Tourette Syndrome is a neurodevelopmental disorder that affects children, adolescents and adults. The condition is characterized by sudden, involuntary movements and/or sounds called tics. Tics can range from mild/inconsequential to moderate and severe and are disabling in some cases. Males are affected 3 to 4 more times than females.”  Dan Akroyd, Howie Mandell and Billie Eilish all have reported that they have been diagnosed with TS.

Tirrell suggests that when you are navigating how to work with a co-worker with TS symptoms, consider TS as any other neurological disorder, like Parkinson’s Disorder or an essential tremor, symptoms that are involuntary and damaging to suppress. As a co-worker, Tirrell advises to create an environment of tolerance and acceptance, which will add to the comfort of a person with TS and could allow that person to feel safe and in effect have reduced tics. Stress tends to exacerbate TS symptoms.  Tirrell offers a possible strategy to consider.  The strategy is called “planned ignorance,” where you (and others) role-model to clients and others that you accept the person with TS and you are not bothered by their symptoms. As a co-worker, it is not your role to disclose another person’s diagnosis or warn others about their symptoms.  Your role is to offer acceptance and support.

Tirrell discloses that she has real-life experience with TS.  “As a parent of two teens with TS and a counselor specializing in treating TS, I can share that those with TS symptoms may experience feelings of embarrassment, not wanting to be treated differently nor wanting any attention drawn to their symptoms. The intensity of tics can be increased during times of stress or exhaustion, so the more a person tries to stifle their tics, the more they may feel pressure to express the tic. (Imagine having the feeling of an oncoming sneeze, but you do everything you can to stop it, while trying to engage in a zoom call or learning environment). To be an ally to those with TS, please continue to be compassionate and supportive. It truly makes a difference.”