Q: I was recently given some constructive advice from a career counselor.  He said that my email address could be a turn-off to some technical recruiters and some tech companies.  Is this commonly known?  I have never heard of this. 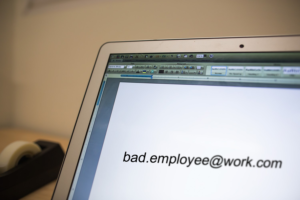 “You’ve got mail.”  Fast forward to 2017.  To me, an AOL address is akin to a pair of plaid bell bottoms that I wore in the 70s at Horace Mann School in Ms. Milinsky’s class circa 1976.  An AOL address feels dated and obsolete.  Hotmail had a similar connotation, until Microsoft replaced it with Outlook.com.

Many job hunters have an email address, which they use exclusively for job hunting.  They don’t use it for any type of personal communication, just job hunting.  Many job hunters are now using a domain name with their last name such as psinacole@sinacole.com.  Other are using gmail, which is an email system offered by Google.  Gmail is free and offers decent storage.  While others have an email tied to their school or college such as psinacole@babson.edu.

I am hoping that you didn’t use an email address with language that could be interpreted as unprofessional.  If you have an email provider that is somewhat dated, think about an upgrade.  Opening a gmail account is easy and takes fewer than five minutes.

Finally, I would suggest against using a work email for job hunting purposes.  Many employers retain the right to view email messages sent or received by employees.  Remember the employer is providing that email system and employees should not assume that it is a private messaging system.