Q:  I am told networking and professional relationships are
important for my career.  I am a newly minted CPA, an introvert, but a
very competent professional.  How do you suggest that I network?  What
are some good first steps? 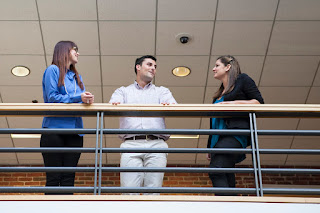 Professional relationships are a major ingredient of a successful
career.  Introverts face an even greater challenge networking.  But that
doesn’t mean you don’t network.  However, it may mean developing a more
planned and deliberate approach to networking.

Start slow and small.  Work to build your confidence.  First, invite a
former co-worker or college roommate to lunch or coffee.  As you
continue to network, your confidence will grow.  Don’t expect an
immediate return from each and every meeting.  Invest the time in the
relationship and the business will come.

USA500 is a regional community of trusted advisers.  Many of USA500’s
members are CPAs, who are eager to network and build meaningful
relationships.  Although one of the primary goals of USA500’s mission is
to increase commerce for members, the network also provides a robust
“rolodex” of resources for your clients.  David Yas, the President of
USA500 shared his philosophy on networking.  “The myth is that you need
to ‘simply get out there.’ It can be both daunting and counterproductive
to try to produce results from a hodgepodge of cocktail parties and
committee meetings.  Instead, make a simple goal of two to three
meetings per week where you can have business discussions with others.
Then keep track of the follow-up. The easiest place to start is with
people you know well. ‘Jane, can we grab coffee this week? No big
agenda, but I would like to talk about ways we can help each other
professionally.’ That low-pressure approach can yield multiple
introductions. And your network, slowly and steadily, begins to grow.”

LinkedIn is a valuable networking tool and can help with in-person
networking.  However, it does not replace in-person networking.
In-person meetings are still more valuable than a LinkedIn connection.

After launching my business more than 15 years ago, I still hold
myself to networking goals.  I have a LinkedIn networking goal of 3 to 5
new connections per week.  Regarding in-person networking, I attend at
least one group networking event per month and meet at least 5 new
contacts per month (in-person).  Since my summers are typically quieter,
I often with attempt to do more of my networking over the summer.  I
also find that many are more willing to meet over the summer, since
traffic seems to be lighter and schedules seem to be less demanding.